Twitter Ads has come a long way since the beginning of promoted tweets in 2010. Twitter has always been a trendsetter in terms of advertisement, with the Co-founder, Biz Stone, stating in a blog post that “traditional web banner advertising isn´t interesting to us”. They didn’t jump on the classic “fill your website up with ads” train, instead they found a less intrusive, more effective way to monetize the social network but ads that are integrated into the platform and shown to users in a natural, native way.

These ads have been crucial to Twitter’s success, with 86% of its revenue coming solely from advertisements. All of the money from these ads has, in turn, resulted in a return on investments for the thousands of brands who run campaigns on the social network. Brands can promote tweets with various different objectives or they can promote their twitter account. The difference here is with promoted tweets, your tweet will show up within the newsfeed of the users and with promoted accounts your account will show up as recommended for them to follow. With all the different objectives such as, brand awareness, website visits, downloads, conversions, etc. every brand can create the perfect campaign customized to their needs. But enough with the small talk let’s get to some of the best real life examples of incredible Twitter Ad successes of all time!

The home-sharing company that has revolutionized the travel and home rental experience is known all over the world. Twitter has played a big role in its digital marketing strategy to promote use of the website and application. In order to promote the use of Airbnb to sublet homes, the company promoted a tweet that offered to pay users $200 for rent each month. This created a lot of excitement, shares and conversations about the promoted tweet, which lead to its big success with a participation rate of 4% in the promoted tweet. The success is due in large part to the discount that they used and the interaction they had with users by retweeting people’s comments and responding to them. This goes to show that the key to creating hype is to provide as much value as you possibly can, although it doesn’t have to be in the form of $200! 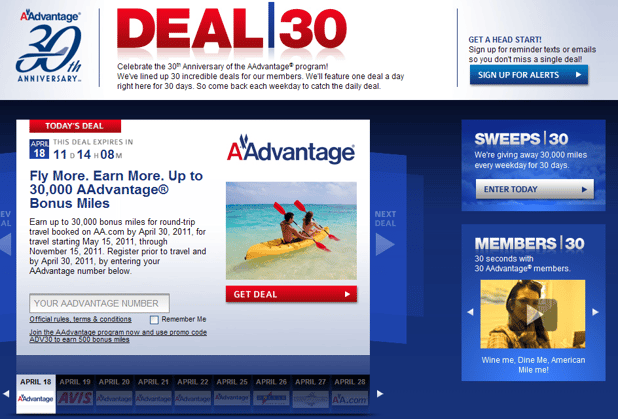 The story of the American Airlines 30th anniversary of the AAdvantage loyalty program is one that we can all learn from. What they achieved in the end was the start of a movement that began with the Twitter contest called “Tweet to Win 30K Miles”. This was only a small part of a bigger campaign by the airline, but even so the results obtained were incredible, showing how important the incentive and strategy really is. The goals of the campaign were to increase traffic to the larger campaign Deal 30 website as well as to increase the hype around the deal and bring new followers to the new @AAdvantage Twitter account. Within one week the website received 18,000 clicks from Twitter, the @AAdvantage account obtained a 70% increase in followers and the deal gathered over 27,000 entries from users. Even with these incredible results the company stated that in the future to further improve the results they would decrease the amount of steps to enter in data to apply for the deals to increase the amount of entries.

The next success story of Volkswagen will get your creative juices flowing! In February 2011 they sponsored the Planeta Terra Festival in Brazil. In order to promote this sponsorship they created a campaign where they hid tickets all throughout the city of the event and made a giant treasure hunt by providing a map of the tickets location and zooming closer as more users shared the hashtag #foxatplanetaterra. The hashtag became a trending topic within 2 hours and got people to actively interact with the brand as well as the event. The creativity around this campaign is what made it such a success, it didn’t involve a huge budget or a brand new piece of technology, just a GPS, extra tickets, and a hashtag is all it took to make this campaign a wild success! To get similar results with your campaigns you need to think outside of the box and find a creative way to grab attention of users and create hype. 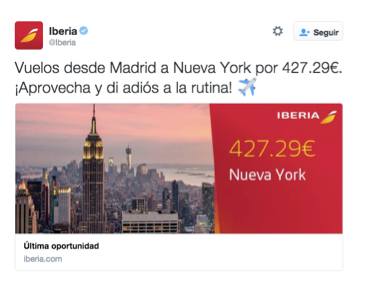 Iberia is the leading Spanish airline that offers flights to destinations all over the world. They had experience and success with social ads but focused mainly on facebook. When they started to run social ad campaigns with Cyberclick they were introduced to the vast potential of the social network for businesses. The way this company was able to achieve great success with Twitter Ads was by combining prices with images in real time. This was all made possible with Twitter Tech Marketing, which combined Iberia’s API with that of Twitter to make real time tweets that included the lowest possible price, text related to the destination and image of the destination, the perfect combination for incredible results. Anyone who has ever bought a flight before knows that the prices change drastically and rapidly, these promoted tweets not only gave a return on investment but helped customers get the best price in the best moment. The campaign was able to create more than 1,350 segmentations and a search cost 10 times less than any previous social media results. Dynamic promoted tweets as opposed to “always on” promoted tweets, especially in this case, increased the company’s return and lowered their results, as all of us aim to do.

Advertising on Twitter is constantly improving, if you have not gotten involved with the social network yet, or haven’t received optimal results then please check out the following articles and download the ebook now, there is no time to waste!

5 sectors where advertising on Twitter is great for online sales